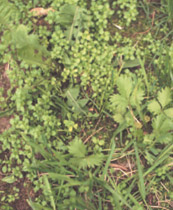 Although it may seem odd to find a discussion of mosses included with turf grass diseases, it is true that mosses can be a turf problem and they do spread by means of spores. Thus, there is logic to this placement. Mosses are plants that are usually only a few inches tall, but may reach a height of two feet. Most of them possess leaves and stems, although some are scale-like and result only in flat growth on rocks or trees. Unlike the fungi, all mosses contain chlorophyll and produce their own food through photosynthesis. There are three general types of mosses: the true mosses (Musci), the liverworts (Hepaticae) and the hornworts (Anthocertae).

The liverworts were so-named because they were believed to be beneficial for liver malfunctions. However, the liverworts have no known medicinal value and no mosses have any such value. As a matter of fact, there are probably very few groups of plants that have a lower economic value than the mosses. Only the sphagnum peat mosses show any significant worth. Although mosses grow in nearly every kind of agronomic circumstance, most of the time that they constitute a problem in turf they are found in moist, heavily shaded situations. Furthermore, any additional pressure that makes it difficult for grass to be the major species encourages takeover by moss.

A lack of proper fertilization practices is a good example. The result of damage by moss is very simply displacement of turf. It is usually very difficult to get turf established in areas that have been infested with moss. This is due to the fact that the environmental conditions are more favorable to moss than to turf.

Thank you again for visiting our website.
We look forward to hearing from you.