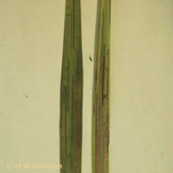 The smut diseases of turf grass are fungi which affect leaves, stems and seed heads. Those attacking vegetative portions of the plant can be very destructive, resulting in the shredding and death of the plants. Where turf grasses are grown for seed production, outbreaks of smut in the floral tissues can cause considerable decrease in yields.

Extended periods in the 50 to 60 F. range are most conducive to stripe smut development. Plants grown at 90 F for prolonged periods usually do not show symptoms. The disease is more severe on older turf areas than in newly seeded or seedling areas, and is more prevalent in varieties that tiller profusely. Stripe smut is most severe during cool dry springs when the fungus can keep pace with grass growth.

Thank you again for visiting our website.
We look forward to hearing from you.